Past Writings, peruse the calendar

Now imagine them all in black fabric. Just plain black. Or maybe red, I am having swatches sent to me. But think black. These all come from a site that makes very customizable couches so I can most likely mix and match some pieces.

Couch One
I like that this one has solid pieces so its smooth for napping and things wont be lost between the cushions. I hate the material they used. It’s what I want but I haven’t fallen in love with it.

Couch Two
I really wish the back on this was solid. But…
Imagine you are at my fabulous party(held by me) and this is in the center of the room. People can sit almost anywhere! I also like that it is so clean and square and not messy looking. This couch can also be built to an size I want and I could probably switch out the back.

Couch Three
I know the back is way too low on these, and the way they arranged the pillows is really lame.
But I just really like it.
Why must I be so practical?

Couch Four
So, this one is made with black velvet, though the picture is bad. It’s pretty close to my drawing and looks soo comfortable. If I did get this couch I kind of like the idea of black velvet but it would not be the kind shown, because I hate the way it leaves marks when you touch it. It would drive me crazy.

Couch Five
This is similar to four, but its purple and has different feet.

Couch Six
This couch is completely different but I just had to throw it in here because it fucking rocks. Why do I have to be an adult? WHY?!

So yesterday I went to the doctor for my yearly physical and it was awful and embarassing, but I’m being very responsible.

Anyways, to make myself feel better I decided to continue my quest for the ultimate sofa.

I had some luck at one furniture store and the saleswoman helped me design a custom, and ridiculously expensive, sofa. But it wasn’t perfect.

So, I want this sofa to invite people to come and sit and talk, or cuddle. It also has to be nap worthy. Though honestly, I just want it to be supercool and very me.

Macro was so boring I made you a lovely picture so you can understand what I’m thinking.
I also included a diagram showing why the shape is so awesome. 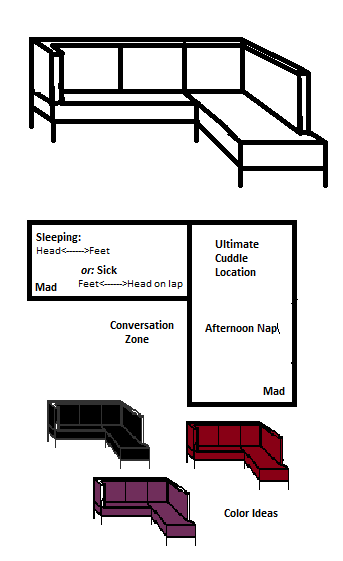 Try not to be jealous of my insane artistic ability/warped sense of geometry.
Thoughts?
Standard